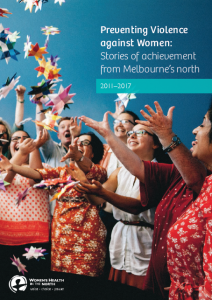 Preventing Violence against Women: Stories of achievement from Melbourne’s north [PDF] provides a showcase of progressive and exciting work occurring across the northern metropolitan region.

It particularly looks at the work occurring across local councils, health services and community organisations which have been working together to prevent violence against women since 2011.

This project aims to strengthen the Building a Respectful Community Partnership and expand its reach into the community. The project is being implemented by WHIN, with funding from the Victorian Government’s ‘Community Partnerships for Primary Prevention’ grants program. Over 12 months, the project will provide staff from partner organisations a variety of training and capacity building opportunities.

The northern metropolitan region (NMR) of Melbourne has a long history of work to prevent violence against women. Once of the earliest initiatives to address community attitudes in Melbourne’s north was the Week Without Violence Campaign, with events run by family violence workers in Melbourne’s north since 1999. Many local governments in the region also leveraged the White Ribbon Campaign to raise awareness of violence against women, selling ribbons and holding events since 2005.

In 2007, VicHealth launched a framework for a primary prevention approach to violence against women that aimed to address the social and economic causes — identified as gender inequality and rigid gender roles — and community and health professionals in Melbourne’s north were quick to take up this progressive approach.

Awareness-raising activities gradually evolved into action to promote equal and respectful relationships between women and men and address structural gender inequality. Preventing violence against women became a dedicated role within several local government and community health services, and specific projects and plans started to be developed. In 2008, a review by WHIN identified 14 distinct projects or programs in the NMR to prevent violence against women.

WHIN, having worked to address violence against women since it formed in 1991, embraced a leadership role in advocating for primary prevention approaches. In consultation with local government, WHIN developed Building a Respectful Community – Preventing Violence against Women – A Strategy for the Northern Metropolitan Region of Melbourne 2011–2016. In 2012, WHIN formed the NMR Preventing Violence against Women Committee and in 2013 held an event where 50 organisations endorsed the vision and goals of the regional strategy.